We are delighted to share photos of work sent in by our
lovely lacemakers.
December
Worked by Hazel Smith as a lockdown project. 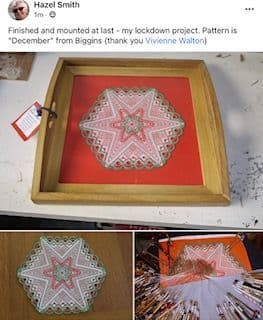 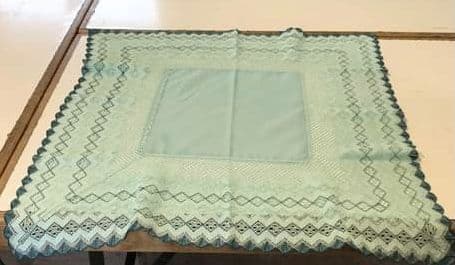 Being worked by Pat Goold Georgina's Cloth
​​​​​​​Made by Georgina Stanton 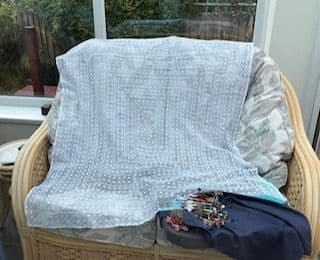 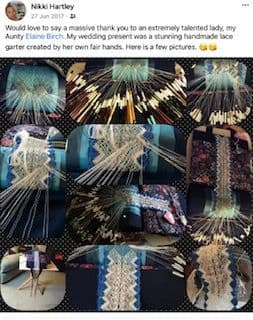 Nikki Hartley writes:
Would love to say a massive thank you to an extremely talented lady, my Aunt Elaine Birch. My wedding present was a stunning handmade lace garter created by her own fair hands. Here is a few pictures
Second Time Around Garter
​​​​​​​
Made by Elaine Birch in Liverpool colours! Remember you don’t have to do my colours. This is Joan done longer and with a Christmas theme. Well done  Sushma.​​​​​​​

Made by Ann, she says she was a novice when she bought the kit.
As she learned she picked it up and did more. She has added a collar and more ribbons. 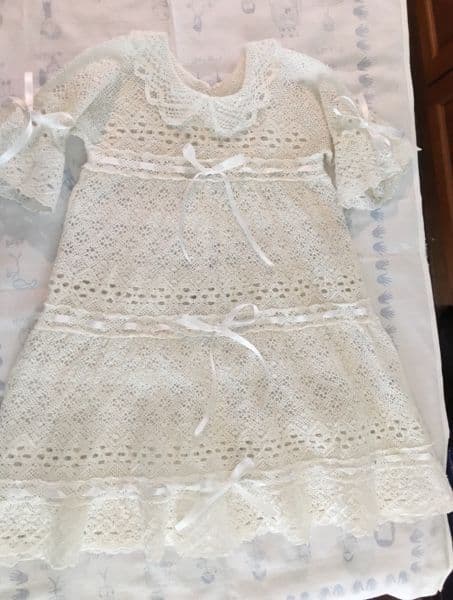 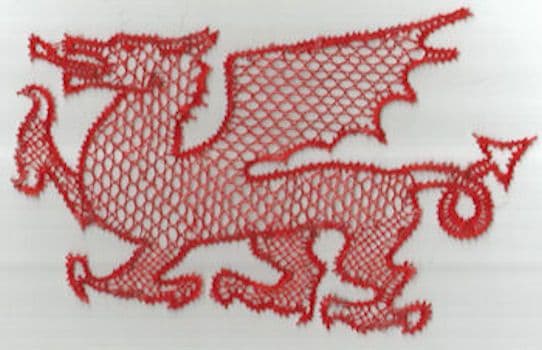 It was made (with help) by Jessica Mace, a quite young lady who is not very experienced.
25 Years

25  years worked to 5ft instead of the original 11¾" of the pattern. Fantastic. Worked by Lesley Beverley. 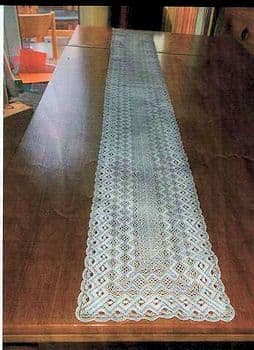 Made By Ruth Richardson who won 1st prize at her WI. 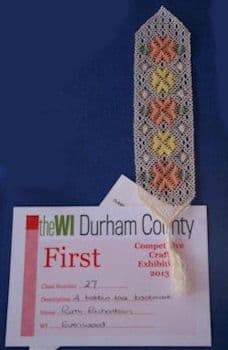 Butterfly Mat
Worked by Anne Newton of Nene lacemakers.Anne was entering a competiton and was challenged by her friend, Athene, to do it in black. So she did! She used as well as the black four colours of metallic. Looks great and she won!! 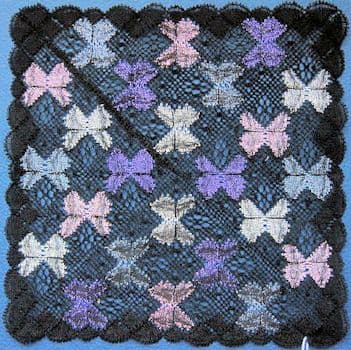 This crucifix was made by Pat Foster and it is the first piece she has made on her own! .

She says  "It was the first pattern I got to do on my own once my teacher informed me that I had done all the basic torchon stitches..
I feel like a learner driver who's just gotten permission to take the big red L off the front and rear bumpers... " 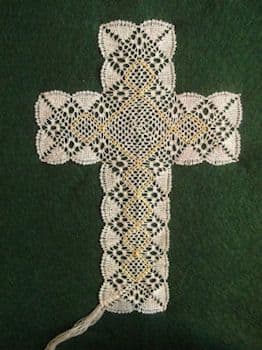 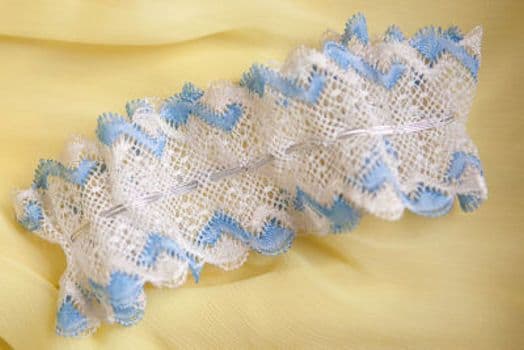 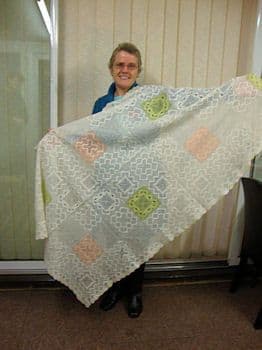 Heidi
Heidi worked by Helen Lewis who has only been making lace for 18 months. Love her colours. 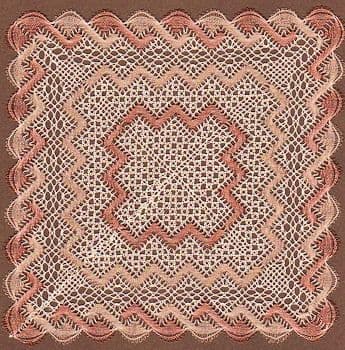 Garter
Margaret Peek with her niece wearing the garter made by Margaret. 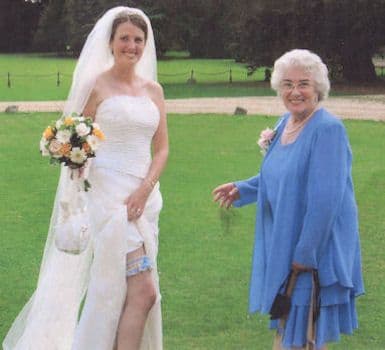 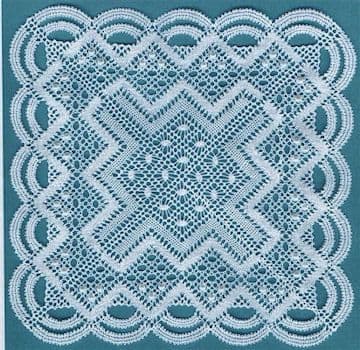 Rainbow
Another way to do Rainbow, worked by Yvonne and mounted in a tray. 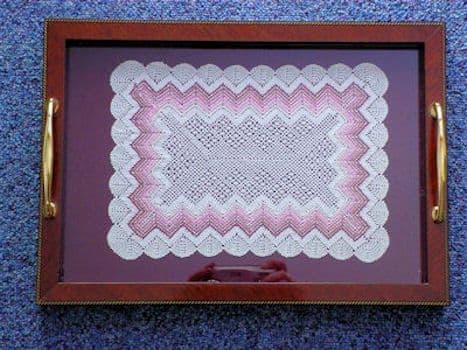 Little Angel Dress
Worked by Sheila Webster. Sheila says she lined the dress in peach with peach trim.
She also adapted the bottom frill to make the pretty hat. 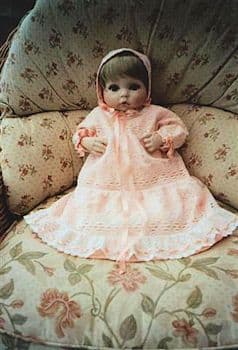 December
A variation on December worked by Maria New. 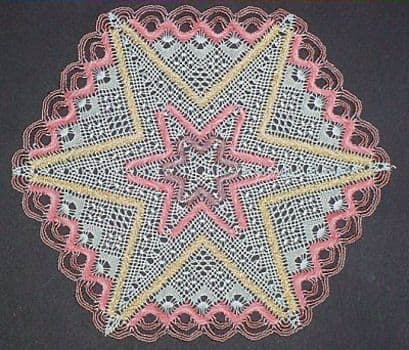 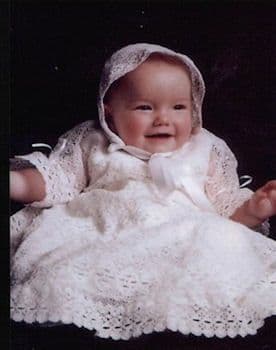 Fengate Cloth
Paula Gooch visited us and brought her lovely version of the Fengate cloth.

She says it has taken her 3 years but what a lovely cloth! 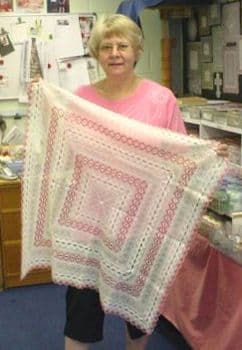 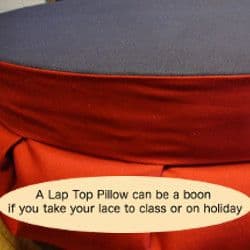 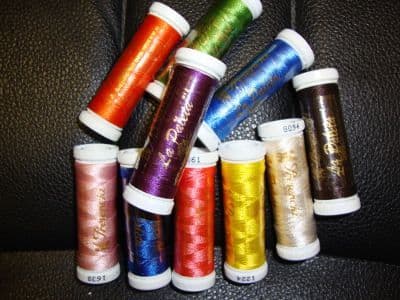